Renewable energy displaced 1.8 Mtoe of fossil fuel consumption and avoided 4.2 MtCO2 of greenhouse gas emissions in 2017. This was equivalent to 11% of total energy-related CO2 emissions.

In 2016 Ireland was 26th out of 28 EU countries for progress towards the 2020 overall renewable energy target. Ireland’s low share of RES-H is the biggest reason for our poor progress.

“We must continue to develop our own renewable energy sources, with the most realisable opportunities represented by incremental increases to our onshore wind portfolio and significant opportunities in offshore wind, in addition to contributions from solar and bioenergy."
Jim Gannon , CEO, SEAI

At least 16% of gross final energy consumption (GFC) in Ireland must come from renewables by 2020. This is a mandatory target under the EU Renewable Energy Directive. It is commonly referred to as “the overall RES target”.

There are further targets for each of the three main modes of energy use: Electricity, Transport and Heat. The graphs below show Irelands progress towards each of our EU and national targets for renewable energy in 2017.

This graph shows the Irelands progress in overall Renewable Energy Share. In 2017 this was 10.6%, with a 2020 target of 16%. Renewable electricity accounted for over 60% of renewable energy used in 2017. Transport represents the single largest sector of energy use, and the lowest share of renewables.

10% of energy consumed in road and rail transport must come from renewable sources. This is a mandatory target set by the Renewable Energy Directive, often referred to as RES-T.

Renewable transport fuel use is almost entirely due to biodiesel and bioethanol. These are blended in all regular petrol and diesel for sale in Ireland.

Without weighting factors, biodiesel made up 81% of renewable transport energy use in 2016. Bioethanol accounted for 18%. This is partly because of the higher use of diesel than petrol. Most biodiesel qualifies for the factor of 2 weighing but no bioethanol qualifies.

Including the weightings, biodiesel accounted for over 90% of renewable transport energy in 2016.

Renewable electricity in road and rail transport also counts towards the RES-T target. However it accounted for just over 1% of renewable transport energy use in 2017. The DART and Luas tail services are the largest users of electricity for transport, however the number of electric cars on the roads is increasing, albeit from a low base.

Ireland has set a national target of 12% of heat to come from renewable sources by 2020. The share of renewable heat was 6.8% in 2017. Renewable heat is dominated by the use of solid biomass in industry.

There has been a large increase in the use renewable heat in the residential sector, due mostly to the growing adoption of air-source heat-pumps.

30.1% of electricity came from renewable sources in 2017, when wind and hydro are normalised. Normalisation is where the output of wind and hydro electricity generators is averaged over a number of years to even out the effect of varying wind and rainfall conditions in any one year.

A record high of 532 MW of wind-generation capacity was installed in 2017. Normalised wind accounted for 84% of renewable electricity generated in 2017, and 52% of all renewable energy in 2017. Wind generated 25% of all electricity in 2017, second only to natural gas. 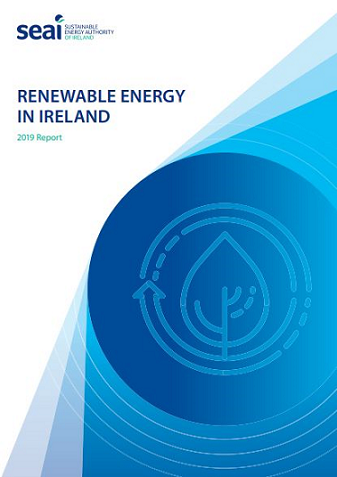 View the dates for upcoming statistical publications from the SEAI Statistics team.

See an overview of the comprehensive statistics SEAI develops for energy use in Ireland.

The SEAI statistics team have a calendar of energy publications, including Energy in Ireland and the energy balance.

This chat has closed. To continue the conversation try to re-connect or call us on 1800 250204